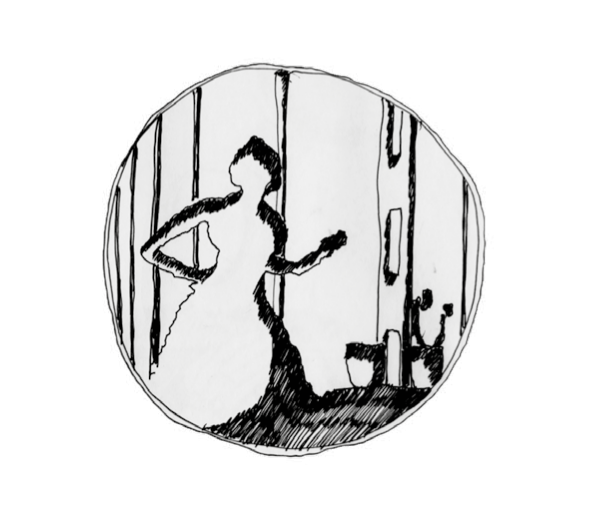 My grandmother’s 90th birthday was yesterday. She sat at the end of the table underneath a large pine tree in what used to be her garden (now my mother’s) with a pair of wrap-around shades hovering slightly above her nose. Her obliviousness to the hovering eyewear had a tremendously endearing effect. It made her look very old and lost. My nephew sitting next to her had taken to moulding the traditionally yeasty chocolate rolls into anatomical and supreme little handles to nowhere for his tiny hands. Earlier that day, my mother had retrieved my grandmother in a wheelchair from her assisted living quarters just around the corner. It appeared that my grandmother was now living at the end of this table behind a pair of wrap-around shades, in the company of our small family.

“If you don’t see marks from your teeth in the butter on your roll, it means you haven’t put enough butter on it,” my grandmother complained in reaction to the supposedly inadequate pre-buttering of the flag-studded birthday chocolate rolls.

Everyone eventually left and my mother asked if I would stay for a piece of quiche. I asked her if she had ever tried LSD. I knew the real answer was yes; in a way, it was a question to test the degree to which she might still perceive herself as a role model to me. After a few heavy seconds of deliberation, she said: “In your kindergarten… some of the parents were new-age musicians.” And off she went, carefully administering some details from an LSD session she had had with them — a session wholly in accordance with the guidelines of Stanislav Groff, a psychedelic pioneer. She had become a large spider, completely in control of everything that came into her endless web. She had taken this experience to mean that since nobody bestowed upon her any genuinely un- conditional empathy, she must in response be fully capable and in control of her life and its surroundings.

“Have you tried LSD, Janse?”

I had. Twice. It was fun. I described seeing textures and patterns from nature become vehicles of meaning, just as the shapes of letters (sometimes) hold meaning. My mother looked worried. I pro- ceeded to explain the occasions in which I had ingested psychedelic mushrooms. At this point, I found myself weaving some of my friend Anders’ observations into my monologue — that any use of psychedelic drugs is partly for the purpose of retrieving some in- sights and carrying them with you out of the trip and into your normal state of being. Learning something from drugs, in other words. My mother still looked worried; her face resembled a small, rare fruit.

“Don’t take LSD, Janse,” she said. “Have some kids instead. Explore the contents of your boredom.”

With the vibe veering on the edge of preachiness, I embarked on a long and deliberately unstructured recounting of something I had read about the Pirada tribe of the Amazon, knowing quite well that my mother would quickly lose patience and interest. It was an anecdote about an American missionary who — with the common spiritual arrogance of missionaries — set out to make good Chris- tians of the Pirada. After two years of being stricken with every possible tropical disease, during which he was obliged to learn to distinguish minute variations in the throat sounds that made up the Pirada language, he finally learned that their language had no tense other than the present, no numbers, no words for colours or directions. This meant his bible translation and general attempt at arousing interest in Jesus was peppered with insurmountable lin- gual and cultural obstacles. The whole undertaking of converting the Pirada to Christianity was given its final death blow by the mild-mannered, high-pitched laughter they produce when they hear about people who attempt to learn from experiences other than their own. Among the Pirada, sharing experiences is seen as a uniformly negative and harmful activity. For the same reason, Pirada infants playing with large knives are not a rare sight. Any- way, the point I attempted here via the distribution of ethnographic facts eventually amalgamated into a statement from my mother.

“Janse, of course I haven’t taken every piece of advice I’ve been given,” she said. “Not by a long stretch. All I’m saying is that reality is the strongest drug of all. All those substances… you don’t need them. Explore boredom instead.”

My bike ride home usually takes 45 minutes. It was early evening and the weather augured on impending summer. I discovered I was happy, so I bought two very cold cans of beer in a small shop with lots of gambling computers. While drinking, I wondered how Mariah Carey could manage to reach that absurdly helium-like voice register, and how the gambling computer named “Disco” featuring a 3D-animation of an effeminate African disco dancer came into existence, and how it might react to any feeding of small change into its soulless bowels.