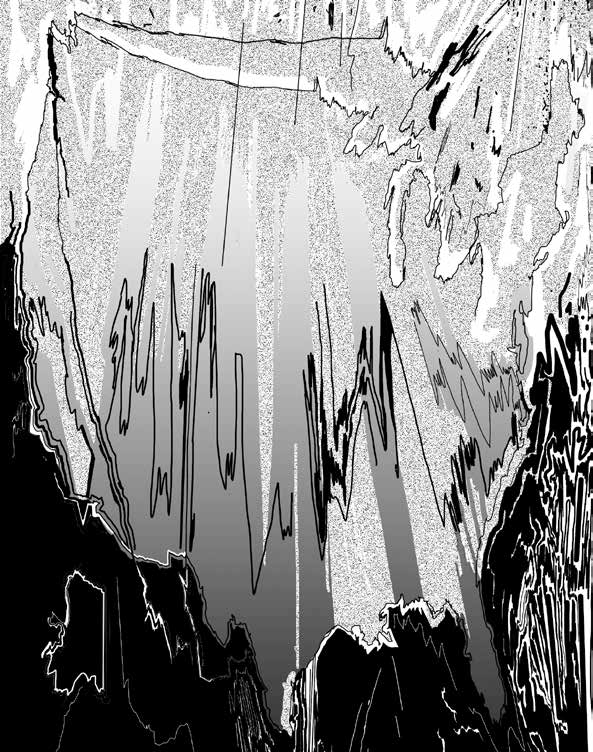 LET ME TELL YOU ABOUT JAMES, the twenty-seven- year-old American who was my neighbour in California last a year.

James stands over six feet tall with a bloat- ed belly made of beer and meat. James is not only white but pale. James sports a shaggy ginger beard and his eyes are blue and bloodshot. When he laughs, his whole face lights up and a hoarse chuckle that swells from his abdomen. When James gets mad, his face cringes and his eyes widen. James was born, raised and home schooled in Santa Cruz — a place that, according to James, is “known for its hippies, but should be known for its neo- Nazis.” James loves guns. James owns guns, though he doesn’t store them at his university housing. He keeps them at a shooting range — or at least that’s what he tells me. James does, however, keep a machete in his apartment.

James is a drifter. I guess that’s what drew me to him in the first place. We’d just entered 2017 and the scientists had recently moved the Doomsday Clock to three minutes to midnight. James was trying, in his own ways, to get ahead. His major at UCSB was Religious Studies. When asked why, he would say, “because I want to know how people find meaning in the world and in life, how people create meaning out of chaos.” Despite this, James thinks like an economist. He reads people and social dynamics like a businessman, looking for their weak spots, searching for leverage. Everything in James’ mind is either a win or a lose.

James drives a big white van. Every so often, he drives it halfway up the mountains behind Santa Barbara to a plateau. I went with him once. It was another sunny day in California and we parked on the side of the road and walked to a small enclave where an old, rusty mobile home hid in overgrown bamboo, and chickens trotted the ground on white-feathered feet that looked like snow boots. Here James buys his weed, sometimes with cash, other times with Adderall. A woman, kind-spirited and somewhat dazed, handled the transaction while her husband smoked cigarettes in the back, petting their three-legged dog.

It is an idyllic place with a view of the coast and the Channel Islands in the distance. He would like to live in a place like this in the future, James explained to me that day on the mountain. Consequently, James also smokes a lot of weed. James has even invented a new type of bong. It doesn’t have a name yet, but the gist of it is that it doesn’t use water. Instead, it uses a carbon filter that, according to James and his “sensitive, gay” business partner, removes most of the additives from the smoke, resulting in both a cleaner and rounder taste as well as a healthier way of getting high. James is an entrepreneur. He reached out to local glass blowers, had a prototype made and won a local competition, which gives him access to labs for further testing. James might get rich off of this invention. If he does, he will no doubt shake a salty middle finger at academia and be on his way.

James loves weed almost as much as he loves to barbecue and he loves to barbecue almost as much as he loves alcohol. If he was older and drank with more sophistication, you might even call him a connoisseur, but he isn’t and he doesn’t. James often gets drunk, even on weekdays. It happened on a regular basis that he would wobble up the stairs in the late evening to find me smoking cigarettes on our patio. He would join me on the couch with a heavy sigh and then commence with what I came to know as his preferred topic of conversation when intoxicated: the impeding war between the Left and the Right in the U.S.

It would always start out with guns. James would explain how the Left on the coasts and in the progressive university hubs was made up of “a bunch of pussies” who would eventually be rendered defenseless against the rising neo-Nazis if they didn’t mobilise and arm themselves, now.

“I’m worried,” he would emphasize, face animated, ginger brows raised high, bloodshot eyes widening as they stared just past you. He was even scared, he occasionally admitted, because this conflict, as he saw it, was inevitable and approaching fast. When attempting to engage him, often with the intention of changing the subject, James would cringe and reply, “you don’t understand. I know these people.” James would then proceed to tell me about how he knew people on the Right, unlike most of the people at the liberal coast universities. James talked to these people. Apparently, what he had seen and heard made him worried and scared.

I often tried to counter James, explaining how I highly doubted his vision of the end of the republic, but drunk and high off his mind in the misty Pacific night, James would point his glass of rye scotch directly at me and write me off as a naïve visitor from conflict-free Europe who simply wasn’t capable of understanding what James understood — how deep the conflict ran.

“This isn’t your fight,” he would state aggressively, “and these people don’t fuck around. When the war breaks out, all the lefties will be trapped in the cities. The middle of the country has all the food and water. You don’t wanna be trapped in a concrete prison without guns and food and water when they come at you!” I guess not, James.

As these late-night talks became more frequent and the pattern of James’ thoughts became clearer to me, I found myself becoming more curious as to who these people were; the people on the Right, who James knew and talked to. James never disclosed this information and only repeated the same phrase every time. “I know these people, I talk to them.” If you asked him head-on, he would sigh and let his balding head fall into his hands. Sometimes, he would even whisper to himself, yet loud enough for you to hear: “I should stop talking.”

He never did, though. The monologue conversations always lasted until I successfully changed the subject or simply got up and left. On rare occasions, they would stop when James’ girlfriend came upstairs to tell him it was time to go to bed. A graceful and calm young woman, she seemed like a grounding force in James’ life. It wasn’t that we eventually agreed to disagree. We just realised, somewhere along the line of endless, bleak doomsday talks, that James was by nature a pessimist and I an optimist. Only once did I persuade him to see it from a different perspective. I remember a talk we had in early Fall quarter 2016 when I had just moved in to the coop in Isla Vista.

“You have a nice outlook on life,” James said all of a sudden.

“I try to cultivate one,” I thanked him.

“Well, you seem successful.” This was, of course, before the election of Trump, when Hillary Clinton was still predicted to be a strong and secure win, when James’ country was still safely in the hands of a charismatic diplomat who had governed carefully for eight years. The mornings after these talks, which could go on until 4 AM and often did, I would see James drift out of his front door, head down and hungover.

With the election of Trump, something rose to the surface of American society and to the surface of James’ mind. James is progressive and conservative. James loves guns and is a leftist. James wants the people around him to prosper and thinks of them as exploitable. James is studying the transcendent and is looking at the world through pragmatic, economical eyes. James wants to understand and forget. James knows these people and, more importantly, he knows that they are people — complicated, nuanced individuals with contrasting beliefs and opposite views within themselves, like him. James easily created conflict with the people around him when he tried to express his sincere concerns. Part of the reason was simply that he got too high, too drunk, too offensive, too racist, but part of the reason was also that this is not something people like to talk about. Behind the doomsday visions and call to arms, what James was saying struck a real nerve. James is an oxymoron, although I don’t think he would describe himself as such. No, James would say that he is from a place of hippies and neo-Nazis. In that sense, James is a whole American.