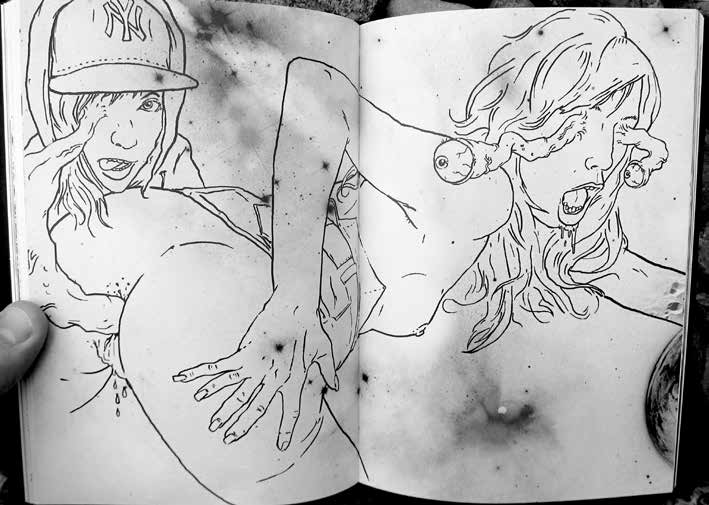 Heroin is heaven’s breath. i do it cuz i luv the brain body milkbath and cuz it cocoons me in slit-eye cool. and i do it cuz it opens an inner door that will lead me to my “real assignment” in near future time.

Tawny turned me onto the sensual cloak of escorting & dope when i visited her in San Fran one week, during the period when i wanted her to be my grrrl-friend… Tawny had been massaging her brilliant brain with nature’s finest, as in heroin from a guy in the Tenderloin she’s known for years… it’s apparently always good H, he’s a careful low-key dealer and he knows her schedule so she doesn’t have to fuck around with getting beat bags from street strangers or hang out waiting for somebody to make a run around the corner, “wait here” and there goes $100.. more on this, in a bit..

I had been doing amateur porn in NYC, in the Bronx, Jersey Shore and Philly & Baltimore, M/F scenes in basements & rooftops, dungeon submissive bondage shoots & warehouse gangbangs & east village backroom bar-fucks, all before tawny & before hooking.. my big high in the porn years was the primo hash my roomie Bonebitch copped direct from a middle eastern friend.. sex on hash was like masturbating in a tub of jello- a very buzzy soft-focus breathy high that I loved and which became part of my on-camera personality, the space-y low-voiced no-limits cool-chick… but hash became the warmup band for heroin. Dope changed the heartbeat of sex for me and maybe because hooking & heroin are illegal, they went together as a sweet hot fuckyou combo that I was drawn to. Able to walk into any situation like I owned it, getting turned way on by the idea of fucking my clients in the slow & sexy dope-movie in my head… I fucking loved it. Loved it till it turned on me like a cigarette-burned pitbull. You know exactly how that goes. I kept shooting scenes for my porn-pirate friends, but I was now finding more buzz in getting handed a wad of cash from a total stranger, warm & wet in my total sex & confidence dope zone…this became a few years of nights spent in NYC hotel rooms and hedgefund-dudes’ lofts, dope-high & dope-sexy & floating just above the bed… it was straight hookersex in the early days but it quickly got dirtier, it went to the places that the wives & girlfriends would never go. Nasty outcalls where my skanky-hottie reputation was well-earned and I was paid to be the dirty freak.. and sometimes with another pornsister in the room beside me as a dopehigh “sister team” (like in “are you two really sisters? that’s so HOT!”, so we keep the myth going during our little lezzie-sex interludes because the tips are insane).. middle-aged guys pumped from their Meadowlands football weekends and they’re happy to watch us 2 kinky “sisters” tongueslurp each other in 69, then ride their viagra rods hard & deep in reverse-cowgirl…

Some of the porn chicks were making good $$ stripping in the Bronx & Queens, so I found a cool stripjoint in midtown. I’d sometimes have a client come to catch my last set before we went back to his hotel. On a dope high, strip clubs are an animal lair. Full-nude places are the best, there’s totally cobra hypnagogia in my onstage heroin cool that would be less-than if i had a thong on.. and also, my dear Illegal cadre. I just really love my pussy… I really do, I love looking at it, how it’s shaped and how my lips peek open a little smile when I do splits down the pole.. bending over into a guy’s face and looking fierce into his eyes with my head between my legs is a gorgeous act, they don’t really, really quite know how to process the culture-coded jolt & desire in a few seconds so they affect a slightly cool mask, but their eyes are telling me that we’re in a very old campfire circle.

So, back to the point of origin: one night, freshly cash-infused after a tryst with a client who wanted us to arrive quite unwashed & stinky-sweaty as part of his fetish. Tawny & I went to her dealer dude’s Tenderloin pad.. up 3 flights into a silvergrey parlor with a nouveau lamp trimmed & burning in the small bay window. Santoro’s Chinese & Colombian, late 30s, quiet & aware. I see they have a comfortable antenna shorthand and the exchange of energies & wares goes down in moments. He’s absorbed into the darkness of a small hallway as Tawny glides through a thin wisp of cedar incense smoke and joins me on the sofa.. she uncaps a small brown glass vial, lays out 2 long greyish white lines and rolls a crisp $100, slow-snorting one of them. a few beats.. she rRRRrs to me, her voice a half-octave lower, “your turn”..