My uncle, who’s my wealthiest family member, was a lawyer and deputy district attorney out in LA and I knew he had quite a cool life so I thought being a lawyer might be interesting.

I had my first work experience when I was 15 at my local crown court. Kingston Crown Court. They had a murder trial whilst I was there. The codefendants, who were all Jamaican Yardies, had pseudonyms which were Mr Black Mr White. Mr Brown and Mr Pink. The whole thing was like something out of Quentin Tarantino’s Reservoir Dogs. I got to watch the whole trial. People were standing up in the witness box pulling off their shirt showing all the bullet marks they had and screaming in really thick patois. The whole thing was just amazing drama and I loved it.

I spoke to my uncle who was a District Attorney in Beverly Hills at the time and said I want to be a barrister, would you give me some work experience? He then flew me out to Beverly Hills.

My uncle was a big drug war enforcer, he was going out to one of the roughest towns in California. Lancaster, just outside of LA. He was busting organised crime rings there. I had an LAPD jacket, loaded gun and was out breaking into meth labs. I then got a completely distorted view of the legal profession because I’d seen a really exciting trial and then my uncle who drives around in fancy cars, carries a loaded gun and was on the news the whole time.

I wanted to get involved in organised crime, defending predominantly. I wasn’t very interested in prosecution, as at the time seemed futile to me. Going out seeing deprived areas in North America where the only economy is the production of methamphetamine, raised my awareness of all sorts of issues, not just the drug war but the whole criminal justice system.

That’s when I applied for law at UCL.

I graduated in 2007, the height of the financial crisis, my dad lost his job and my parents had to sell their house. I needed to make some money and look after my family so I applied for commercial pupillages rather than criminal because the commercial pupillages starting salary was sixty thousand pounds per year. I didn’t understand the job as well as being a criminal barrister. I didn’t realise that it was essentially just sitting on your own responding and writing really complicated letters which rely on reading a hundred lever arch files full of documents. It was a niche path and the people there were kind of on the autism spectrum. I felt awkward and then started doing too much cocaine at the weekends, drinking loads and just going out having a fun time with mates.

I was earning really good money but I was doing a bad job.

I wasn’t technically disbarred. I was seeing a girl at the time, we were on a night out in Shoreditch and I was with her in the smoking area of The Book Club on Leonard Street. I got out a bag of cocaine from my pocket and as I did two burly guys in plain clothes, who were very obviously policemen, came marching straight up to me and grabbed me by the wrist. ‘I’m terribly sorry. Look I’ll throw it away’ I said. They said ‘No, no, no we’re taking you to the station.’ I was really drunk…obviously…I was getting cocaine out on the street.

I had built a bit of a rapport after talking with them. They said ‘Sorry, we’ll be honest with you. We’ve been sent here because there’s an illegal minicab that keeps using this spot and sexually assaulting girls and we’ve been staking them out’. It is the middle of January and was the coldest night of the year, they had been around a corner hiding looking for this rapist and they had the audacity to tell me… ‘If we take you in now, by the time we’ve processed you we’ll be able to go home or otherwise we’d be out on the streets till 6:00 in the morning if this guy doesn’t show up’ So a rapist got free, my career was ended and two policemen got to cut their shifts short to be in the warmth.

I told them I was a barrister, which I shouldn’t have done in hindsight. They were then under an obligation to report me to my regulator which is the bar standards board. Usually, when a barrister gets arrested for possession of a drug they will be acute enough to understand that, if they never mention that they’re a lawyer, no one will ever ask them. There are barristers up and down the country getting arrested for drunk and disorderly or possession of whatever and just not mentioning it.

I was at Shoreditch police station at one o’clock on a Sunday morning. They’ve got an overflow area for when the station is full, it’s called the cage and the police refer to it as the cage. It is a big metal cage outside on the coldest night of the year and after they told me ‘Don’t worry, we’ll give you a caution you can go home.’ they left me out there in the freezing cold, with the girl I was with, for 5 hours until it was becoming light. They then brought me in and put me in a cell. By the time I left it was nine o’clock in the morning. I had been there for over eight hours and had to be in a cell with a schizophrenic next door talking to himself and banging his head into the wall. I hadn’t slept a wink. I just confessed to the caution so I could leave. But if I’d have not confessed then they would have never bothered to prosecute me because it was a quarter of a gram of cocaine and it just wouldn’t be in the public interest to bring it to court.

I thought Fuck, what am I going to do? Do I or don’t I tell the board myself. So I kept my mouth shut.

I kept working, took on as many briefs as I could, made money and got taken on full time at Chambers. I then forgot about it, even though I had received letters from the bar standards board. I ignored them.

Then one day I was walking into work and the receptionist saw me and her face was aghast.

‘Shhhhh…’ she said and scurried me around the alley as I was trying to come into chambers. ‘Have you not seen?’ she said. I was like ‘No, seen what?’ A letter had gone out to all the chambers about the situation. I was in trouble at that point.

I thought that the things the bar standards board would have a problem with would be crimes of dishonesty because they’re crimes that affect your ability to do your job. I also thought possession of cocaine would genuinely be a slap on the wrist, but instead, it was a thousand pound fine and two years of search engine optimisation so that whenever anyone googled my name the first thing that came up was George Mcbride professional misconduct, possession of class A drugs. They paid for this! They pay to ensure that the first thing anyone would ever see if they google my name was that I have been charged, which then puts the pressure on chambers to get rid of me because as a barrister you had to bring in your own work.

There were people doing coke throughout the industry. It is not the same as the culture I know exists in the city, like our friends who are traders. I know that people come into their office on a Friday and dealers walk around, conducting transactions, selling bags of coke. But definitely, it is a high intensity, high-stress job where a vast majority of them have alcohol problems and on top of that a lot of them are earning good money and are doing cocaine. Most not problematically, systemic or endemic to the office, but it’s definitely part of the culture amongst the more sociable, younger end of the bar.

I Couldn’t bring in any money for chambers anymore. Technically I could still practice, but the bar standards board knew, in reality, to deal with someone who’s just started their career for less than a year and doesn’t have the long-term contacts to keep their work going through an unsteady period is effectively debarred because you can’t maintain your practice.

I regret, at the time, how I handled the situation because you pride yourself, as a barrister, to keep a cool head under pressure, understand the law and to be pragmatic. What I did was textbook stupidity at every stage.

Now I don’t regret it. I had been doing law solidly the whole time since I was 15. I was convinced that I wanted to be a barrister and then hated it. I felt trapped and I didn’t feel like there was any way for me to get out. I know barristers in their 40s and 50s who hate their job, have three kids that go to private school, an expensive car, a big house in Surrey etc. and they now need three or four hundred thousand pounds a year just to be able to maintain their lifestyle.

If I never had such a public outing and shaming of getting arrested, being plastered over google and living it then I would have never got the opportunity to be so open with it.

One of the biggest problems that we face in trying to change these laws is the system is built up in such a way that for the middle class to be outspoken about it is very difficult. I’ve been gifted. 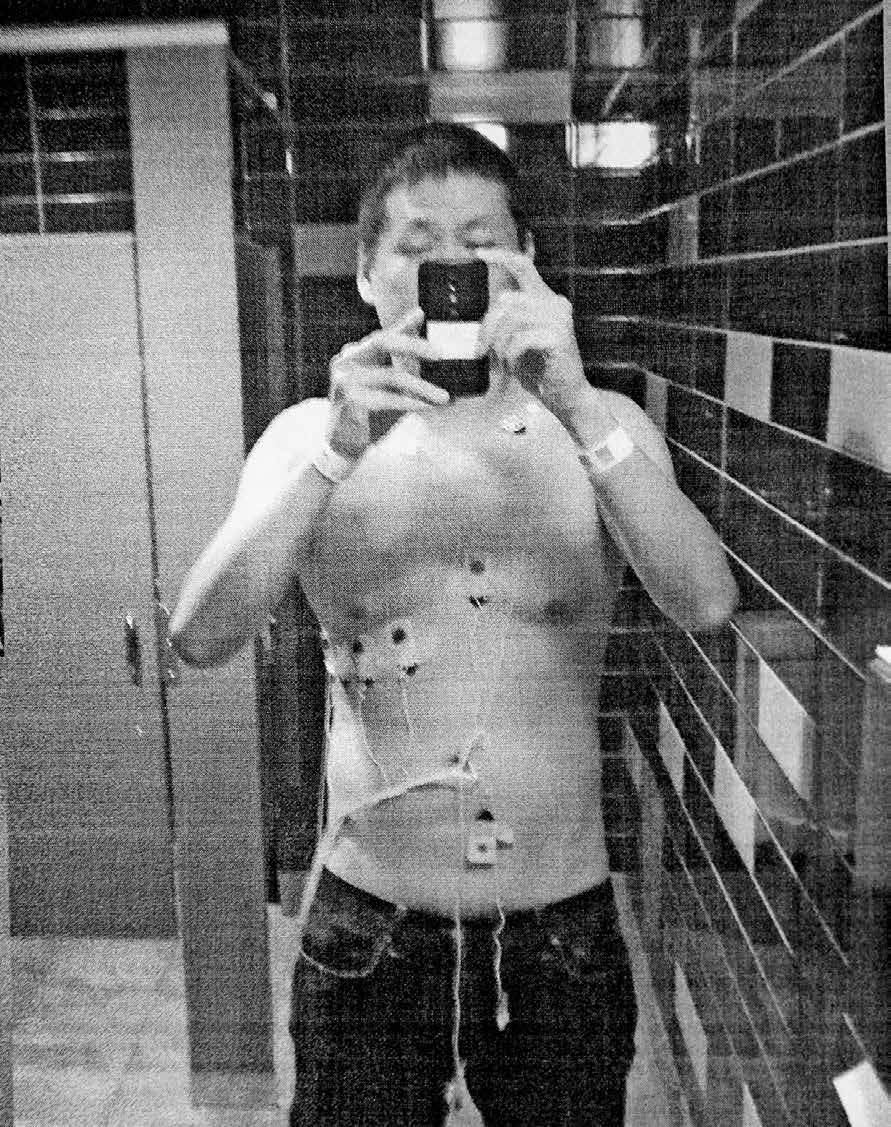