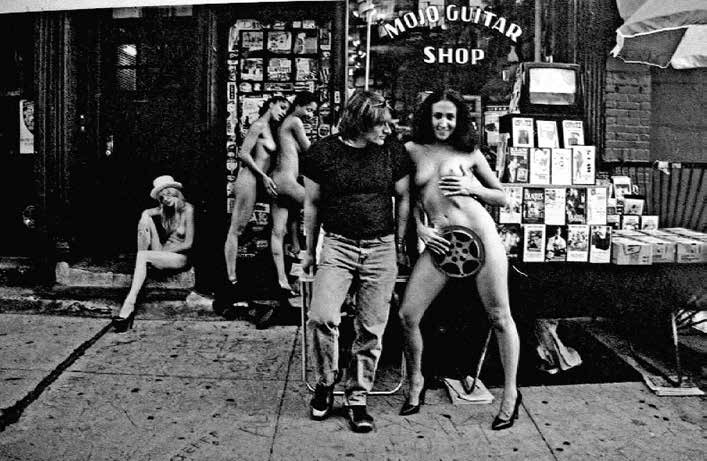 Pony-tailed young Midwestern mommys loudly vocal-fry at their speakerphone besties, as they push their infant royalty in artisanal strollers over to Avenue C for chitchat, croissants & organic caffeine… while a few blocks away, their hedgefund hubbys prep for another day of financial NYC adventure, casually locking the doors of their $1.4 million condo-lofts.. a carefree East Village day like many others, here in Anno Diaboli MMXVI..

but memory bears its weight on darkening air, as twilight fingers turn back the clock..

“…D an’ C, papi… D an’ C…” 1979 midnight, winter, bombed-out Dresden of 8th street between Ave. B & C. Vacant-lot trash-can fires, the smell of burning 2x4s and newspapers hung like incense in the cold black air, wafted west across Tompkins Square park and that smell hit your stomach like a vampire Christmas homecoming, drew you to it like a sacrament. Eyes gleamed furtive like wolves from a few doorways, shadowed by the 2 remaining streetlights on the block. The icy stillness of my breath cottoncandied in front of me as I knocked on the boarded up street-level window frame (and “SOS” is the code-knock or they won’t answer.. 3 slow, 3 fast, 3 slow). Shorty checked me out through the eye-slot on the rusted door, and 3 big cylinder locks unclicked.

He was 5’4”, husky, and he had a big greyred slash of a knife scar that ran from his collarbone to his ear, that he got in his teen gang years, 2 blocks away. He pulled open the door and nodded at me, gave a quick check-out glance up and down the street and locked it back up behind us. The ammonia bite of mould from the dark trashed-out hallway mixed with the smell of old shit from the homeless guys, that slept in the back apartment before they got tossed out, was suffocating. We went through their apartment door that was hand-made out of 2 metal sheets bolted to a thick wood frame with 5 big hinges and covered with black-painted plywood, giving a layer of resistance (till the sawn off 20-gauge could be retrieved from the folding card table if needed). Angel was inside, adjusting the bricks on the 2 working stove burners, the blue gas heating them to a dull red glow. They threw off just enough heat to make a 5 foot creche of warmth in the single room, darkly lit by a few bodega candles. This 4 story building was empty except for long-time dope dealers Shorty and Angel, and a Hispanic woman in her 90s who refused to leave her 2nd-floor apartment, even though the electricity slowly died out in the entire building. Neighborhood folks kept her power on by tapping the pole lines on the sidewalk, and her tv blared Spanish soaps that muffled their plot-lines through the ceiling.

They knew me for a few months so no need for me to say much beyond ‘Wassup?’ and ‘How many?’. They only dealt with regulars and they’ve had to have seen you on the block a lot before they respond to anything you ask. I copped 6 bags of red tape, 4 bags of coke and unopened BD insulin works… nobody ever got the ok to get off in their spot, but the bitter cold and the hearth red bricks made the late hour a splatter of campfire calm between blood brothers.

Unexpectedly, Angel asked me if I wanna hit it here, and i’m on it- even though I lived close by over on 3rd street, it’s a welcome offer. Shorty brought a spoon and a coffee can of their drinking water to the table and nudged the sullen 20-gauge aside to make room. They talked low in Spanish as I took a quarter spoonful of water and eased open the glassine bag with its signature gash of red tape. A quick tonguetip taste and it’s the real deal, bitter and strong. A single bag at this point wasn’t getting me nod-high like it did in ‘79 but it could instantly cool out my legs. They were my alarm – too long without and they started firing off pain streaks, bad cramps contracting the skinny underfed sinews and walking became hobbling into slow build agony. I sucked the shot up through the point, tied off with the torn bandana from the table, flexed my rail-thin forearm until one of my several old faithfuls is engorged, and pushed in for the fang-bite. Sensuous slow-motion “Pulp Fiction” swirling plume of blood-iron red as I pulled back the plunger.. there’s no sight quite like it. The taste hit my stomach instantly and wrapped around my spine, whispering on its way to my skull.

‘81.. the 2nd building off the southeast corner of 8th St. & ave. C was literally hollowed out inside, its walls holding large partial slabs of flooring that jutted like aboriginal anterior cliffs in the dark mildewed air. Candles were placed on what remained of the top floor and they illuminated the quiet in this sanctum. Inexplicably, 2 small figures moved back & forth on that ledge approximately 40 feet over our heads, the candles behind them flickering their shadows far across the ceiling. Superior was dealt from this unique space. Dope of new legend. Junkies expectantly huddled outside like a buzzy weekend night in a hotly hyped new club. Superior was tough as nails, hit harder than anything that had been out for maybe 2 years, and it got the least cut anyone saw in a long while- veteran junkies were shooting 2 bags and ODing. A few people died on rooftops and in basement stairwells, tucked between 2 garbage cans as life ghosted out of them, curled into a fetal ball on a broken-door roof with the lower east side and Manhattan Bridge as their last sight on earth… I remember asking, “what happened to..?” “she died man.. OD’d a week ago..” She was a cool chick, somebody I copped & shot up with a few times, blown out like a candle from Superior. I don’t remember her name from this far away, but she was cute, smart & strung out, a dazzling combination. We were all coming and going back then.

Well… Superior was exactly what it said. And if you were careful with it, you’d be swaddled in dope bliss without recent equal. The street picked up on it fast, and so did the early beginnings of Operation Pressure Point: the hero of the ‘80s entitledyuppie infestation, Mayor Koch, created this steamrolling campaign to sterilize the area of dope-rats, abandoned buildings and to start the safe-for-Wisconsin – MBAs gentrifying process, so Alphaville busts were increasing daily. I got snagged one day, copping from.. yep.. Angel.. I should’ve known what was up but I wasn’t in a position to wait or look elsewhere, more about that someday soon. Since the heat was officially on, everybody had to reconfigure logistics, and with Superior, the answer was simple – they cut a hole in the cathedral roof as it were, right above the big chunk of remaining 4th floor. Dropped a ladder down onto it for roof access, so that any attempted bust on ground level gave the worker bees ample time to climb up & out and to scatter across all the roofs and likely right back to their family apartments with the circular, overhead, fluorescent light fixture in the kitchen, the great cooking smells and the Corazon de Jesus pictures framed on every wall. The Superior folks decided to employ what looked like young kids as the dealers on that ledge, or that’s how it appeared to most of us, looking upward from the candle-flickering gloom 4 floors below. The delivery system was a plastic bucket on a rope, lowered up and down in an infinity loop of bags & cash. 2 larger dudes maintained decorum at the front door and shouted out “BAJONDO” whenever cop cars trolled nearby, the cue for 2 dozen sidewalk customers to morph themselves from a large resolute cadre of steely-eyed eager dopefiends into a random-looking cluster of casually strolling “… nothing’s going on over here, just reflecting on how lovely the weather’s been…” passersby in half a blink, until the all-clear “TATO BIEN” shout. I’ve rarely met a junky who lacked the ability to be an excellent character actor, given the opportunity.

‘83.. I knew the day was wrong all around. The late afternoon light had a creepy, metallic strangeness and the air throbbed at intervals with a low jagged sawtooth pulse, a psychic warning signal. The streets and cop-spots were weirdly empty of dopefiends & dealers like an expected gunfight unleashing chaos at high noon- nobody out, no regulars, no familiars. Copped instead from somebody I didn’t know in a dodgy sector where 2 people were shot & killed in some ripoff the week before. “Maniac” was cut with something cheap and poisonous and its 2 oversized bags floated in shiny greyish chunks in the spoon. I sucked it up into the barrel and hit it. “Garbage” was around for a long weekend, then gone. Big very potent bags of bitter light-brown dope that could get 2 people slit-eye standing-nod high from splitting one bag & snorting it. I shot 2 of them, thinking it was biz as usual.

“Garbage” took 3 people an hour to get me out of its OD, and “Maniac” got me onto a gurney at Bellevue, glucose tubes in my arm and a half gallon of brackish brown bile sloshing around in a bedpan placed on my crotch so I’d be quite certain to see it upon waking. These 2 overdoses in particular were like paths in the clearing. Dark silence with no thought, no awareness, just lights-out unconsciousness into shutdown. Of the dozen I’ve had, these 2 seemed like the waiting room to death. I’ve fallen down flights of stairs, got concussions on sidewalks, woke up in puke on more floors and basements than I can count on 2 hands, but these were a malignant final soft kiss before quiet extinction. Some people thought enough of me in those 2 instances to pull me back out. I’d be a faded memory now if they hadn’t.

I gotta wrap it up here for space consideration. Perhaps more, soon. Peace.