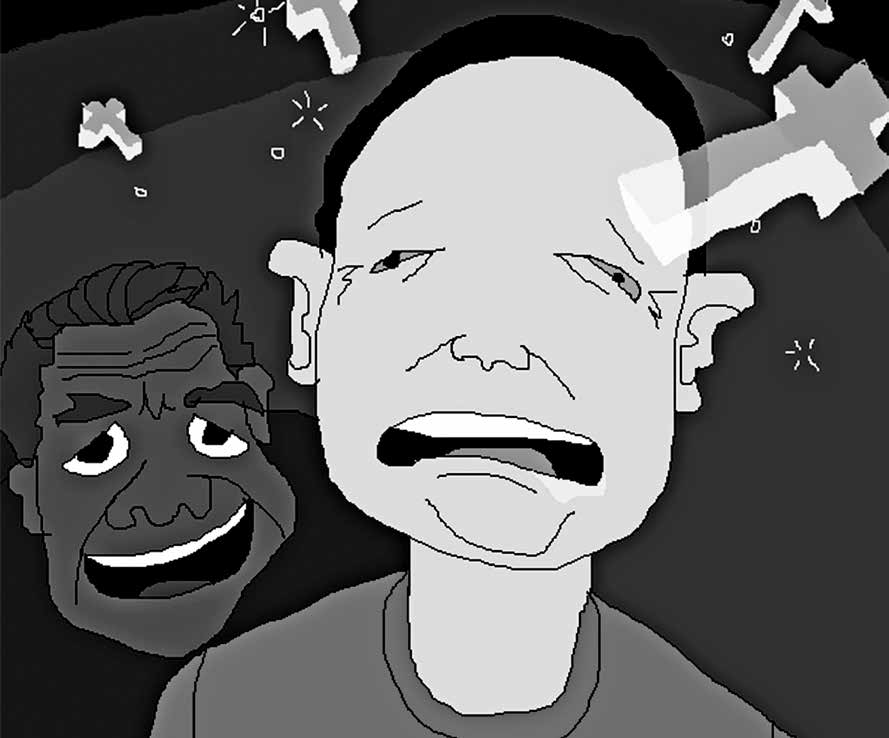 I sometimes think that even if you are not looking for drugs, drugs will find you. The former First Lady Nancy Reagan, during the aggressive War on Drugs in the 1980s, repeated the slogan “Just Say No!” Well, I prefer to say “know” to drugs! My problem was my ignorance about drug issues. I didn’t have practical knowledge or understand how they functioned in pop culture and our daily lives. These two stories may demonstrate what I am talking about. And hopefully, include a lesson or two for some of you.

Rolling My Acid Eyes
It was the early 1990s, and I was visiting my family in Osaka, Japan for the summer. I was lucky to have two college friends from Evergreen State College staying with me for a few weeks. Peter and Kristian had both moved to Japan, planning to teach English for the next two years. One day, while they were out interviewing for teaching jobs at various language schools, I stayed home. For days, my eyes had been itching painfully, and I desperately needed some eye drops for relief. Since my family didn’t have any, I went to Peter’s room to rummage around. Luckily, he had a little bottle among his toiletries. I squirted a generous amount of it into my eyes, thinking all was okay. This proved to be in error. As Marsellus Wallace of Pulp Fiction might say, “Naw, man… I’m pretty fuckin’ far from okay.” You see, that wasn’t Visine, ladies and gentlemen—it was a bottle of liquid LSD!

It would be one thing if I’d dropped acid of my own volition, but in this case, I didn’t even know I was using it. While sitting on the toilet, I started to notice my colourful pants; their patterns of ladies were elaborately dancing, dervish-style, all over my legs. I quickly became terrified and confused. I figured that since mental illness runs in my family, it had finally caught up with me. Staggering over to the next room, I began hyperventilating on the tatami floor in front of the kami dana (a small Shinto shrine used to memorialise departed loved ones in most Japanese homes) and noticed the two large photograph frames starting to move around. My deceased grandparents’ pictures were yelling and screaming at me:

I crawled away like a worm, bowing profusely as I retreated out of the room, and promising them I’d become a better person (not so sure about the masturbating part). The rest of the day was very painful and traumatic. I didn’t know what was happening until hours later when my friends got home and took care of the situation. They explained to me about LSD’s effects and made sure I was okay. Eventually, by early dawn, I was. So what’s the moral of this story? It’s very simple: When going through another man’s toiletries, always ask, “Is there LSD in these eye drops?”

Joey’s Banana Bread Odyssey
It was going to be another fun standup comedy show. I was opening for the legendary Joey Diaz at Southern California’s Brea Improv. This is one of my favourite comedy clubs to perform at, and Joey’s show is always fun and memorable. Joey’s been around the comedy circuit for a while and done many lucrative TV and movie gigs over the years. Hell, he is so good he’s even worked with Bobby De Niro! So I had very high expectations and knew this was going to be a magical night. But boy, I had no idea how nutso things would turn out!

I was late to the show, and as I walked into the festive green room, Joey was all smiles, greeting me with his usual kindness and humour. After we’d talked for a few minutes, he asked if I was hungry. He had read my mind; indeed I was. “Have some of this delicious banana bread.” It looked so scrumptious, I devoured between six and eight slices in a nanosecond. Unbeknownst to me, it contained one major, magical secret ingredient: marijuana!

Because I didn’t smoke or follow pot culture, I didn’t even know that one could eat marijuana. Since then, I’ve read that eating it produces more body-centered effects compared to smoking it. However, it takes longer to feel those effects, making it easier to underdose or overdose.

Finally, it was getting close to my turn. Not wanting to share the bread, I forced myself to scarf four more slices, washing them down with an extra large Red Bull, before rushing to the stage.

My show was going great, and I was very happy with my performance… up until the moment, it all hit me. I felt tingling feelings all over my body as though I was experiencing Highlander’s “the Quickening.” I started to mumble. “Oh, my God. I’m floating. What’s happening?” For seconds, I saw myself as a Japanese Jesus. Was I ascending to yellow heaven? Everyone is the room busted up laughing; everybody knew what was going on except me. Joey was laughing so hard, his guffaws were piercing my eardrums. After the long set ended, I stumbled back to my car and decided to wait till I was saner, calmer and soberer. It seemed that every time I tried to drive away, the whole world began spinning out of control. So I scrapped that plan.

Every few hours, Joey phoned to make sure I was okay. But mostly he kept laughing maniacally.

You get the idea. Five to six hours later, I finally drove out of the garage. Being hungry, I entered the drive-thru at a nearby Jack In the Box. I was somehow able to place my order, but then couldn’t find the pickup window, so I kept circling the restaurant over and over until the manager walked outside and yelled at me to stop. With that, I finally received my well-deserved junk food. I was so happy when made it back home. I had reached the end of my odyssey. So, what’s the moral of this story? Another simple lesson: When Uncle Joey gives you banana bread, always ask, “Is there marijuana in this?” If he just starts laughing at you, you’re going to have one helluva night! In my experience, recreational substances should only be consumed on purpose. Even if you’re not a drug user, it’s a good idea to read Illegal Magazine so you can learn what to expect. Who knows—a little knowledge could even protect you from becoming an accidental druggie!